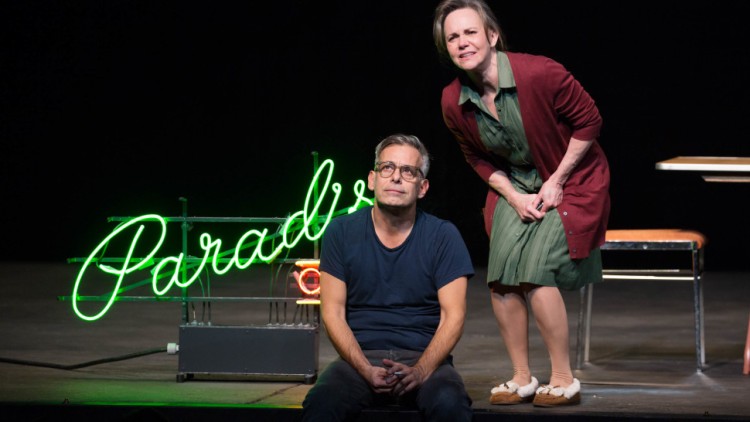 The stage at the Belasco Theater was so empty it was naked. The set amounted to an ugly table with chairs, some cluttered shelves, and a phonograph. The backdrop was the stark brick wall of the theater itself. When Joe Mantello first appeared onstage, I mistook him for a techie until he began delivering his opening monologue, tackling a role usually played by a much younger man in a much better costume. I already found myself mulling over inevitable comparisons with the production of The Glass Menagerie at the Booth Theater in 2013 starring Cherry Jones (Amanda), Zachary Quinto (Tom), and Celia Kennan-Bolger (Laura). I wondered whether it was worth revisiting the play so soon after that great success, which was the first production I’d seen to portray Tom as a gay avatar of Tennessee Williams himself, adding new and unexpected dimensions to the proceedings; his arguments with his mother about where he was sneaking off to at night were never quite so poignant.

In that production, the tragedy of the Wingfield family played out on a literal island circumscribed by rippling ebony ooze. Laura seemed to materialize out of thin air, unexpectedly popping out of a couch with all of the suddenness of a half-forgotten memory that somehow intrudes on the consciousness again. This time, though, there was nothing but emptiness. In the shadows, Sally Field (Amanda) and Madison Ferris (Laura) were already visible as they waited in the orchestra to climb onstage. Bracing myself with the reminder that this was still in previews, I had no idea that I was about to be totally transported and enthralled.

A long silence ensued as the performers went through the cumbersome process of lifting Ferris’ wheelchair onto the stage. My heart skipped a beat. I had no idea that a performer with muscular dystrophy had been cast as Laura, who is described in the script as “crippled.” Out of her chair, back arched, and down on all fours, she moved with an indescribable elegance, flowing like water across the stage. I’d never seen a production before where the physical components of Laura ‘s handicap were explored with such nuance. Both the challenges and elegances of physical movement are so central to Ferris’ characterization that it almost feels at times like a dance performance (I was not at all surprised to read in the program that the Broadway newcomer has dance experience.) There is no awkwardness on display here, usually par for the course in performers’ interpretations of the shy and fragile character. Ferris’ Laura is long acclimated to the challenges of her difference. She owns them. And in her space, Laura moves confidently, uniquely, and even elegantly. Rather than her own inner demons, it is largely society’s cruel pigeonholing that forces her into the role of a pariah.

If Eugene O’Neill is the American Aeschylus and Arthur Miller some iteration of Sophocles, then Tennessee Williams is our Euripides. Both were celebrated for their multi-dimensional female protagonists, their powerful abilities as storytellers, their lines dripping with poetry, and their exploration of the forces of Bacchanalian wildness that always lurk just beneath the veneer of polite society. Needless to say, all of this is pure dynamite for actors. The Glass Menagerie is one of the great ensemble pieces in American theater, and the synergy between the members of this cast was particularly electric. I was initially unsure about Mantello’s interpretation of Tom, which in some ways couldn’t help but disappoint after Quinto’s revelatory queer reading of the role. Over time, though, the dichotomy between Tom’s maturity and the relative youth of his sister and mother highlighted that shimmering, slightly unreal quality that William hoped to capture in the play. If Quinto played Tom as the play’s author trapped claustrophobically in his own memories, Mantello portrays him something like the play’s director, separated from the past in time and space but putting on a show for us in the audience in which he selectively interacts with his former ghosts. The understatement of his performance attractively highlights both the intensity of Fields and the subtlety of Ferris.

Speaking of Fields, she is a force of nature as Amanda, a caged eagle. In her blind rage against the bars of her enclosure, she wounds herself and everyone around her. Now she is driven by a sense of rage over the isolation of her daughter and the selfishness of her son; a moment later, she is soft and maternal; at still other times, she’s lost in obsessive memories of better days. Fields’ Amanda channels the great heroines of world theater, echoing the rambling desperation of Blanche, the imperiousness of Lady Macbeth, and the spiteful wit of Hedda. There is a dangerous undercurrent to Field’s performance bound to her acute awareness of the desperation of her position. Her Amanda is nostalgic for the past but far from delusional about her present. She realizes that she is burdened with an alcoholic son who is about to abandon her and a handicapped daughter she cannot support. The prospect of a gentleman caller is the only hope that can save the Wingfields from themselves. But when her daughter balks in terror at this caller when he finally arrives, Amanda herself becomes the flirtatious center of attention. While she hosts him at dinner with her daughter quivering with embarrassment in the other room, there is an effect such as I have never seen before in any theater. The emptiness of the stage is suddenly revealed to be translucence, a fitting quality for a play named for glass sculpture. Without giving it away, I’ll say that it conveys the same idea of symbolic gulfs evoked in the previous production at the Booth Theatre where the family was literally trapped on an island.

The entire final act was illuminated by true candlelight, providing the scene with an ethereal, almost ghostly ambiance. Earlier in the play, Ferris portrayed Laura as a slightly spoiled young woman whose life’s meaning was reduced to subtle shows of rebellion against her mother’s will. Ferris obsessed over her glass figurines not with an air of insanity but one of triumph, lording over an imaginary world in which, for once, she could be in control and ignore the admonishments of the world around her. At last, though, she invites the gentleman caller into this world, where he finds that he has been set up as a kind of idol deified since high school. In this space, the way Laura moves and the way she uses her imagination are completely natural, and at least for a fleeting moment, he sees the beauty in her existence and not the stigma associated with it. The chemistry between Laura and her “suitor” (a bright eyed and bushy tailed Finn Wittrock) is sizzling, the most sexual of any interpretation I’ve seen. Their tender dance was the emotional climax of the night, symbolic of the themes of the entire production.

Like the casting of deaf actor John McGinty in The Hunchback of Notre Dame, Ferris’ casting proves that physical difference or disability not only should be no bar to the display of talent, but can even bring new life to classic roles. As wonderful as Michael Arden was as Quasimodo and Celia Kennan-Bolger was as Laura (a sublime performance, in fact), there is something special about the truth that actors bring to parts when they share aspects of that character’s identity in real life. Many actors can try to imitate a limp, but few can move with the combination of grace and dexterity required by someone with muscular dystrophy, let alone one as gifted in physical storytelling as Madison Ferris.

Famously, The Glass Menagerie ends with Tom’s injunction for Laura to “blow (her) candles out.” Perhaps fittingly, this performance was the first I’ve seen in which she flat out shakes her head and refuses to do so. This production will linger in my imagination for a long time.