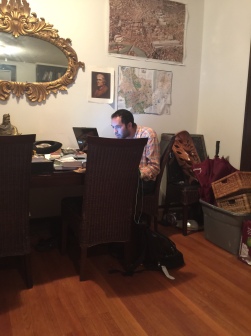 Now, I’ve never actually read Leibniz, but I told my friend that I imagined the philosopher’s argument must have been that if God is omnipotent, omnibenevolent, and omniscient, then nothing would preclude Him from creating the best world possible—only this state of affairs would be in harmony with his knowledge of the Good, his love of the Good, and his ability to bring about the Good. I also guessed that Leibniz argued that the Good might stand beyond human reason, so that turns of events which seem unjust to mere mortals might ultimately be bound up in a nexus serving a higher purpose—for example, it is tragic that humans die of disease from an individual perspective, but the urge to triumph over illness inspires medical advances, which enhance happiness in the long term, etc. As Voltaire himself suggests in Candide, our knowledge of God’s purposes might ultimately be akin to rats’ awareness of the intentions of the sailors on the ships on which they travel.

My friend explained to me that Leibniz’s argument was actually that given a Newtonian idea of absolute space, there must be some sufficient reason that the universe is located where it is and arranged the way it is rather than, say, in another permutation five meters to the left; this reason, Leibniz concluded, must be bound to God’s arranging matters for “the best.” But as my friend wisely pointed out, perhaps Leibniz was wrong to assume that this is the best of all possible worlds—for example, it might be that God operates according to the principle that all universes in which net Good outweighs net Bad should be allowed to exist, though all of them are technically imperfect. Then my friend and I talked about the implications of quantum physics on these kinds of questions, especially the theory that there might be “multiple worlds.” After that, we discussed his dog for a while, and recipes for eggplant Parmesan.

Then I taught Roman history and Latin to a group of ten home schoolers. It went very well; the students had so much fun, one of them threw his pencil across the room in triumph after winning a game that I’d invented, nearly impaling one of his classmates. After two and a half hours, I left the class and walked toward the library to return a microphone that I’d used to record some new raps earlier this week. On the way, I met Patricia, an elderly woman who panhandles on York Street. She asked me to help her cross the street and to walk her to her house. She often asks passersby to hold her hand and accompany her down the block; she is very frail, and moves quite slowly. I always say yes to her, because I imagine that this awkward ritual is one of her only opportunities to enjoy physical contact with other human beings. The last time I took a walk with her, she told me, “I wish that the Lord would take me. I mean it. I have no friends, and no one loves me. I bring no happiness to anyone, and I am always in pain. I wish that the Lord would take me.” I didn’t know what to say to her when she told me that, but the memory of her quavering voice still haunts me. Today, though, she seemed in better spirits, and talked enthusiastically about the weather. We usually talk about the weather on these walks.

Suddenly, I realized that I was no longer holding the briefcase containing the microphone. I scrambled back to the classroom, then to the pizza parlor, and then back to the classroom again. The people at the Lost and Found were most unhelpful (though I appreciated that the secretary had a basket of candy necklaces on hand for visitors to enjoy; I hadn’t eaten one of those in ages, and stole about three of them and a couple of lollipops when she wasn’t looking.) I assumed all was lost, and Emailed the library offering to pay for the vanished microphone. Then I rushed to a lecture on climate change in the Roman Empire, thinking more about the several hundred dollars I’d now have to pay to replace the microphone rather than the details of the lecture. When it was all over, I met with a statistics professor and talked about my proposed methodology for examining the fall of the Roman Empire using mathematical models. He suggested that I would be better served by talking to experts in mapping software.

By this time, it was eight at night. As I walked home, I passed a heavyset African American woman on the street in her late forties. She was crumpled on the steps of an apartment building and sobbing very loudly. Everybody was ignoring her. I asked her what was wrong, and she explained to me that her husband had run off with her daughter, taking all of her money. She didn’t even have enough cash for a train ticket back to her home town. No one would help her, she said; everyone was laughing at her. I gave her a hug and all the money I had in my wallet. She began to thank God, and we hugged again. I turned to leave, but she stopped me with her hand. “Why is life so hard?” she asked me, as if she were expecting an answer. I looked at her sadly, but she insisted more loudly, “Why are people so mean to each other? Why is life so hard? I want to know.”

“I think that most people in the world have experienced disappointment in life and are unhappy,” I said. “They’re too focused on their own problems to remember to be kind. But there is kindness in the universe. Remember that.” She pressed my hand as if I’d said something meaningful, and then we parted. I’d never see her again in my life, I thought.

When I got home, I saw an Email from the library in my Inbox. It explained that the camera had been found on the street by a police officer and returned to the stacks. The librarian asked how it got  there, explaining that the university takes “negligent misuse” of its rented equipment seriously. I thought hard about the situation for a few minutes, and then I realized what had to have happened. I must have absent-mindedly placed the briefcase on the street when I helped Patricia cross the road earlier in the day. What an embarrassing lapse of judgment. But I guess I lucked out this time. All was for the best.