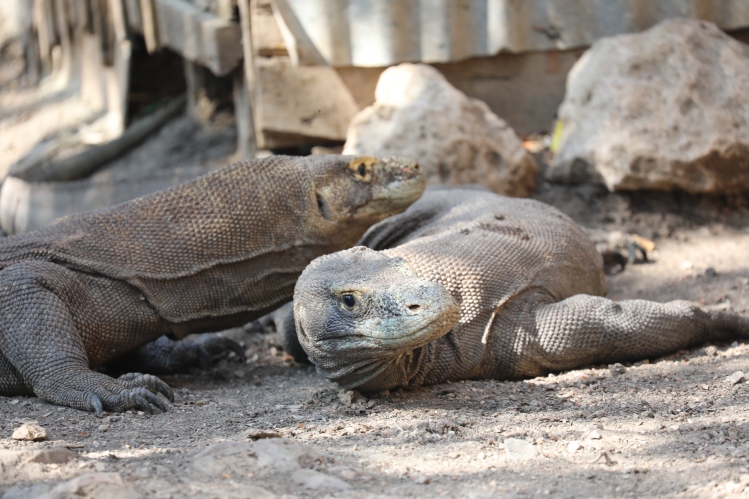 “Don’t expect to see any dragons in the wild,” Ahmed warned me. “It’s rare, very rare. But a bunch of them stalk the kitchen because they like the smell there. That’s your best chance for a picture.” (I wondered if the rangers ever fed them with a spare chicken bone or two to guarantee their presence for the passing cruise ship crowd, but if they did, it was taboo to talk about it.)

I embarked on this dragon hunt in the Komodo National Park off Flores Island with realistic expectations, realizing that only a few thousand of the 8 foot long, venomous beasts still inhabit the wild, and it would be difficult to track them in nature, especially given my rapid schedule. It was already after 10 when I arrived on Rinca Island, and by that hour, I was told I only had time for a hike on the three hour long “Medium Trail” along a dry riverbed, despite my protests that I would have preferred the “Long Trail” along the cove. The weather was already scorching, and the odds of spotting the shy animals were especially low, as these were the hours when they usually hid. To make matters worse, the German couple who’d just completed the same trail saw nothing but the gaggle of fat dragons who hung out by the canteen. Still, the two were grateful for their adventure, especially since one of the dragons had a bloody mouth and they could conjecture animatedly about whom he’d eaten, or who’d eaten him. (Nature is full of blood when you think about it, but it’s a rare sight on a hike because Nature is also vampiric, and fast.) Nearby, uncomfortably close to the scullery dragons, a philosophical looking macaque sat on a gnarled trunk with his head in his hands.

As soon as Ahmed and I left the kitchen area, we saw a baby dragon scurry down a tree. My guide conceded that this was a lucky start to our hike—it was “rare, very rare” to see little dragons, since babies, abandoned by their mothers before hatching, are cannibalized by their elders and can only hope to survive by hiding in the tall branches where the portly adults can’t climb. This was a juvenile small enough to still live in the trees but just large enough to begin exploring the forest floor. Imagine a combination of an oversized monitor lizard, a bullfrog, a turtle, and an alligator. Komodo dragons were only discovered by the West a century ago, and the animals are totally unthreatened by humans, freezing in perplexed surprise when caught in the open. The baby froze politely for a few moments before scampering away, demure but too inexperienced to be so for long. 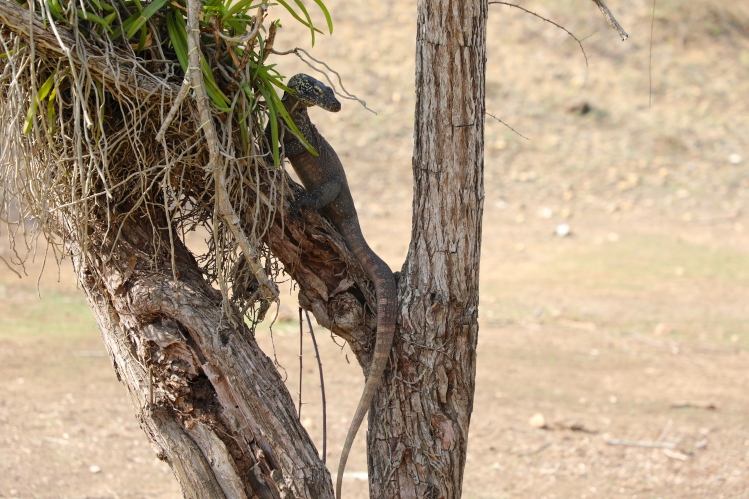 An hour and a half went by, and we saw nothing. I was ready for the hike to become a memory. We reached the heart of the forest and the site of a wadi. Suddenly the screams of a monkey wafted in the haze.

My eyes climbed a tree and down again; at its base was a female dragon stalking the primate, who was altruistically warning its family to stay away. The dragon dominated the sandy path, and we ducked into the underbrush to avoid her. The sound of cracking reeds drew our attention to a couple of wild deer not far off from us. Then, we heard a song somewhere between a rattle and a hiss.

“Dragons, dragons!” cried Ahmed. He tumbled through the forest with a kind of boyish glee that was proof to me of how special the moment was even for a native of Rinca. In a moment, there they were: a pair of gargantuan males eyeing each other suspiciously, one crouched beneath a tree trunk, and the other stretched out just meters away, motionless on our arrival like some ancient marble masterpiece depicting the monsters the Argonauts faced.

“What is the most dragons you’ve ever seen in nature?” I asked.

“Ahmed the dragon hunter,” I said.

Then we found one last dragon crouched beneath a tree, a young adult male, no longer in danger of the antlers of a buck or the tusks of some boar or his parents’ teeth, a newly christened apex predator, his only worry the fangs of rivals should he hazard attempts at romance. He seemed to be smiling to me. 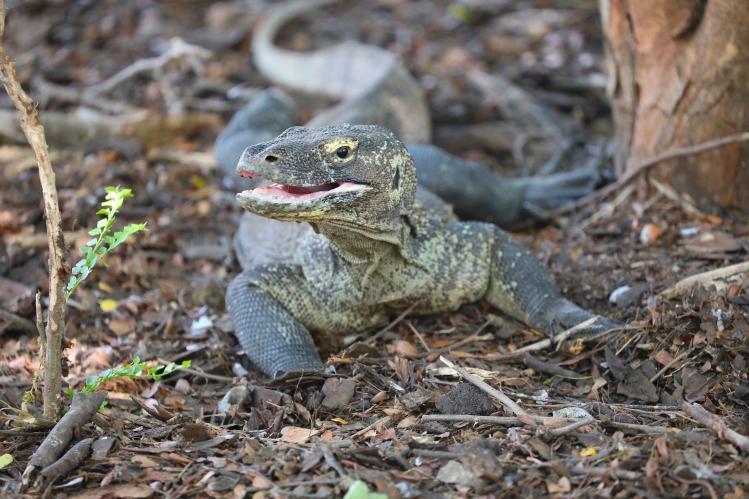