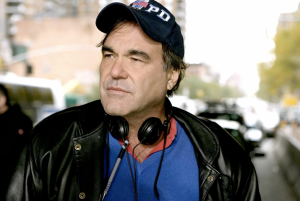 I met Oliver Stone tonight. He was at Yale to promote a documentary and book he created about twentieth century American history: “The Untold History of the United States.” He showed us an hour long episode from the documentary. It lambasted Truman, calling him one of the worst Presidents in American history. Stone particularly blasts Truman’s decision to drop the atomic bombs on Japan (pardon the unfortunate pun there). Stone suggests that the bombings were unnecessary to a peaceful resolution of the war. “The conflict was about to end anyway.” Had Truman only behaved more diplomatically and allowed the USSR to invade Japan, says Stone, there would never have been a Cold War. The nuclear arms race would never have begun. As proof of this idea, he cites Curtis LeMay’s declaration that the atomic bomb had “nothing” to do with ending the war. If “Bombs Away LeMay” said this, Stone reasons, it must be true. He blames Truman for almost singlehandedly derailing the course of twentieth century history, which would have been much better served had he never become President.

Now, I TF’ed a course at Yale last semester on the military history of the West since 1500, and I disagreed with a great deal of the documentary. I didn’t know where to begin when I raised my hand to ask a question of Stone and his colleague. I finally settled on a two part query: “What do you think of the idea of detonating the atomic bomb off the coast of Japan instead of over Hiroshima?” and “what about the idea that the existence of nuclear bombs and mutually assured destruction essentially prevented us from fighting World War Three?” Their answer to the first question was that an experimental use of the bomb might have been an inspired idea that would have helped to intimidate the Japanese into immediate surrender; their answer to the second question was that nuclear bombs made the USSR unnecessarily antagonistic toward the US. Instead, Truman and Stalin could have cooperated on creating a “common man’s century instead of an American century.” At one point, Stone and his colleague literally encouraged the students in the audience to form a revolutionary vanguard. I couldn’t believe my ears—the filmmakers were advocating no less than an alternate version of American history in which the USA became communist.

I would have loved to have said that the reason Curtis LeMay claimed the atomic bomb had nothing to do with ending the war was that he wanted his squads of bombers to get all the credit for that feat. He’d been working for years on fire-bombing Japanese cities, and hoped to claim the glory of the unconditional surrender for himself. And I don’t understand how Stone can simultaneously say that the dropping of the bomb had no effect on ending World War Two, but at the same time that merely detonating an explosive off the coast would have browbeaten the Japanese into surrender. Isn’t this an implicit admission of the fact that the bombs had psychological effects pivotal to ending the war? In fact, the Japanese fought onward until a second bomb was dropped. Do the filmmakers seriously believe that an invasion of the home islands wouldn’t have resulted in millions of lives lost? Or that the Stalinist USSR would have been the best protector of post-war Japan? The documentary said nothing about Stalinist atrocities—the Soviets were largely portrayed as innocent bystanders looking on in horror at Truman’s machinations. Do the filmmakers understand what Stalinist Russia was like? Do they really believe that there would not have been an arms race if the atomic bomb weren’t created in the mid 1940s?

Someone in the audience kept wheezing all night long so loudly that I thought he was going to die—people almost called an ambulance. The old man sitting next to me kept yelling out commentary during the movie like the old men who sit in the theater box on the Muppet Show; I thought it was hilarious. One high school girl asked the filmmaker if he recommended students become “spies” as a patriotic way to help America; Stone almost burst out laughing, and so did I. When it was all over, I talked with some lingerers in the audience, who whispered to me that they thought the film might have been oversimplifying the situation unfairly vis a vis Truman. I agreed. The documentary’s insistence that Truman might have ended the war earlier had he agreed to maintain the office of Japanese emperor rather than call for unconditional surrender was intriguing, though. And it can’t be denied that over the years, Truman consistently gave greater and greater estimates for how many lives the bombs saved, beginning by claiming that they preserved thousands of soldiers, but then raising the total over the years until the sum reached millions.

Eventually, I met Stone face to face at the front of the room. I wanted to ask for a selfie, but was too shy. Instead, I told him I loved Alexander. He told me I should see the 6 hour director’s cut. Then I lied and said it was a shame he never directed I, Claudius. He said, “that has already been directed.” I hugely respected that answer. We shook hands, and went our separate ways.