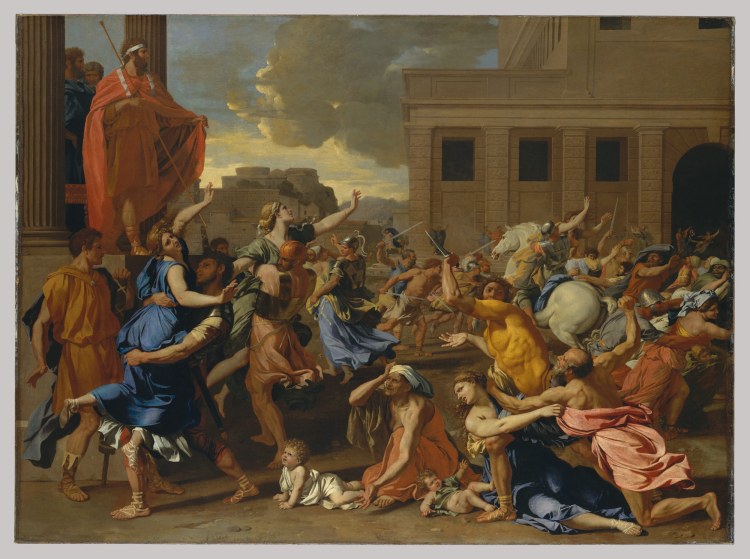 This is a poem I wrote in tenth grade after reading Macaulay’s Lays of Ancient Rome. The style is old fashioned, but I think this is the first thing I wrote of which I’m proud. Yet this isn’t how I’d approach the subject matter if I wrote it now.

Sing through me, Muse, of bloody deeds born out in ancient times

before the Ides of March and ere sweet Virgil penned his rhymes.

bear back this song to that old time ere Rome’s triumphant rise.

Tell of the plot of Romulus, who as a god is hailed,

to see more women with the scarlet wedding gown be veiled.

Upon an early gloaming when the sun god left his keep

and ushered in the stars that bulging mists of nighttime sweep

a train of Sabine pilgrims marched into the Latin land,

These Sabine men and women came to Rome once every year

to celebrate festivities when harvest time drew near.

As bees in spring emerging from an arctic winter’s hive

in wagons all the Sabine men began their kin to drive

to Rome, the site of seven bluffs set on the Tiber’s curve,

the village whose inhabitants surmount the Titans’ nerve.

Soon spying the migration of the faithful from a hill

the King summoned his brethren the high senate house to fill.

“Soldiers!” now he cried, “Know this, its truth I swear by Saturn:

that our Latin city is endangered by its pattern

of stalwart fighting men who boldly sacrifice their lives

to Rome without replacements for our city’s dearth of wives.

A man becomes a corpse without a son to take his place,

so is it any wonder numbers dwindle in our race?

Perhaps our Sabine visitors can their young ladies lend,

for women they have plenty, and on women futures pend.”

While the Romans plotted on the slopes of Palatine

the Sabine crowd, all unaware, scaled the Capitoline.

Their hoary king bore on his back his daughter just of eight,

the princess Calpurnia, worried that they might be late.

Her brother road beside the girl upon his regal mare

promising the eager child that they would soon be there.

And soon the pinewood gates of Rome drew back to meet the crowd.

The Roman king now met the crowd and grinned before he bowed.

“Friends!” he cried, “Now enter, do not hesitate or falter,

pray collect your loved ones and come worship at our altar.”

sitting down to dinner and behaving with decorum.

By now the pulpous evening clouds had just begun to fuse

though were it dusk or twilight weary eyes could hardly choose.

In time platters of food were brought, of venison and hog.

Soft hymns were sung to Neptune oer the sacramental log.

of signals from the Roman king or of his sudden gloat.

The men of Rome now suddenly threw down their wooden chairs,

Unsure whether to call it jest or something more perverse

some men just laughed, while others fumed when they suspected worse.

Befuddled and appalled, the hapless Sabines tried to fight

though struggle was futile in the darkness of that night.

thus did the Romans drive the men beneath the heaven’s dome.

The Sabine men were in despair as clouds drooping and thick

forbid them to mark out their wives or their daughters to pick.

By now the pure Calpurnia had lost her father’s gaze

and strove to meet her brother’s eyes within the writhing maze.

The cries of the poor princess were all futile as they flew,

for every girl cried “Father!”, to distinguish no one knew.

Then suddenly a sodden grip grasped at the royal arm,

the Sabine princess fleeing its acerb designs of harm.

So terrorized by visions of her family made slaves

the tragic Calpurnia plunged into the Tiber’s waves.

“Spare me this dishonor, old man river, bear me home!

Deliver me from violence upon these hills of Rome.”

Thus did she cry before her mouth was silenced by the fall,

her corpse interred by Tiber, sympathetic to her call.

But by now every Sabine had been driven from the hill,

each eye was moist and beard was wet as tears began to spill.

The fathers and the husbands could all barely keep their gaze

upon their shrieking women in the early evening haze.

as wooly hands pressed down on mouths and throats were closed in fright.

The Forum marsh was tainted by blood pouring down in drips

from shredded mouths of women biting down on ashen lips.

Now from the jaws of Romulus rose one triumphant shout

as women were abducted and their men were driven out.

Well aided by the darkness of a night without a moon

a silence soon descended with the final woman’s swoon.

And in the huts of mud, the brides now borne across the porch, 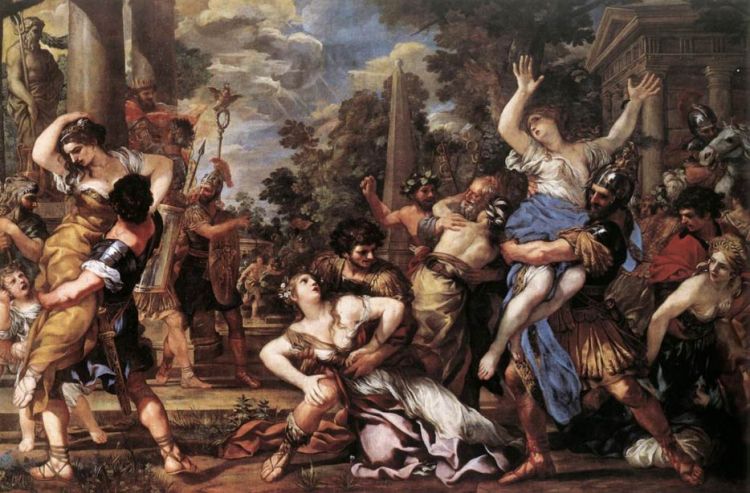 Yet Father Time will dry away the tears from ruddy cheeks

and mouths become complacent with the passing of the weeks.

As love affairs soon flower and as bellies start to grow,

a yearning for their homeland Sabine women do not show.

Thus at least the Romans took their wives’ abiding silence,

for what man knows the difference between sorrow and compliance?

For each brocade the Triple Fates to mortals choose to give

provides mankind one of two paths: to suffer or to live.

But now the frauded Sabine men return allied to fight

with heathen mercenaries in revenge for that rough night.

They tramped in packs, the soggy lands were springing with their stomp;

the Furies smiled upon their cause and on the martial pomp.

aware their nation’s life would hinge upon the coming hours.

as older men rode ordering the great throng into groups.

And when the Sabine trumpets echoed through the hills of Rome

the soldiers rushed to bar the gates to shelter gods and home.

Tarpeia, daughter to the warden of the portal’s latch,

set her gaze upon a Gallic shield’s golden bubble,

thirsting for its sleeted face and heedless of the trouble.

Succumbing to desire of the most outrageous sort

her eyes glistened as Sabines with their trinkets paid her court,

and promised to receive the shields’ bounty as her pay

the girl unbolted all the gates and showed the men the way.

The Sabines, now reminded that they should complete the deal

all soon allowed Tarpeia their gilded bucklers to feel.

Rushing at her, though a child, they crushed her brittle bones

beneath the weight of golden shields, heedless of her moans,

Tarpeia’s ruptured figure with a quake succumbed to death. 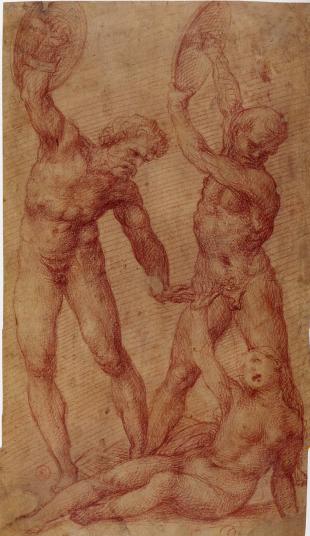 Cried the king of Sabines, “Is this not the Roman rule,

to twist the words of bargains and play allies for the fool?”

the Roman troops had all arrived, and swords were drawn to kill.

Alert of Roman enemies, the Sabine king did try

to scream to his great lines of men a fitting battle cry.

Proclaimed the king of Sabines “For Calpurnia we fight,

My daughter seized by unripe Death upon that awful night!”

Screamed the king of Romans, “For posterity we battle,

For if we halt or falter, we’ll become but Sabine cattle!”

the men fly at each other and their heavy bucklers smash.

Fists are raised and talons blanch as they press down on swords:

Roman and Sabine now prepare to carve through vocal chords.

When suddenly an angry shriek rose up above the din

as women pressed between the men and warned them of their sin.

“Shameless Roman, see your fault and in shame look away

for the sake of godless deeds performed upon this hateful day!

that now our frauded kindred must you force our gaze to leave?

to leave us without gods or homes to bear a widow’s fate?”

With so much said, the women turned their eyes to their old nation

all seething with sincere despair and with unbound frustration.

“And as for you pretenders who think us your kindred blood,

what did you on that night when we were sullied in the mud?

And now you come to slaughter, without asking if it’s right.

The greatest fault on all your parts lies in your estimation

of women as a helpless lot consigned to please their nation.

Now Jove alone may judgment pass and us the verdict loan:

say which is worse, to seize a wife, or live with hearts of stone?” 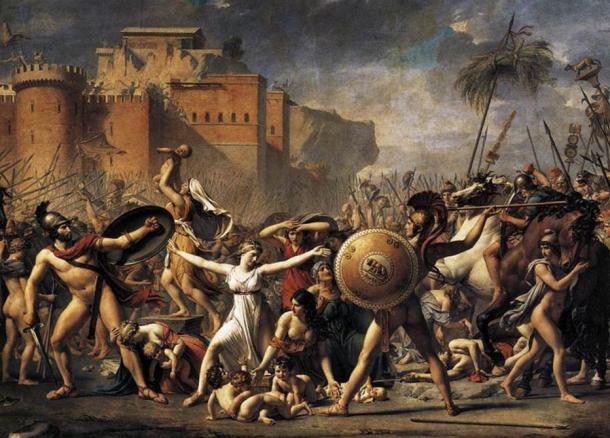 With this impassioned caution every warrior did freeze

and even grim king Romulus sensed shaking in his knees.

Weapons fell and oaths were pledged as holy Phoebus set

and bloodless hands were pressed as if a promise to forget.

Now Sabines quit the battlefield, now all march off to Rome,

to that city of glory which the gods will call their home.

And grasping the repentant arm of every Roman male

the modest Sabine women beamed as they retold the tale.

Thus was the ancient city saved and thus did she survive

with allies strengthening her walls and aiding her to thrive.

The ghosts of all the slaughtered to Elysium now rise

safely dead and buried and so hidden from our eyes.

They leave the sleeping poet to look forward to the day

when Sovereign Rome shall triumph, all the world in her sway.

when all the epic poems are written by the men who win.)